Frosted background, with crisp Ames etching.  Note the needle inscribed "E Pluribus Unum" in the banner above the eagle. 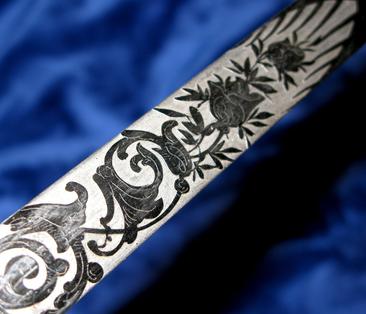 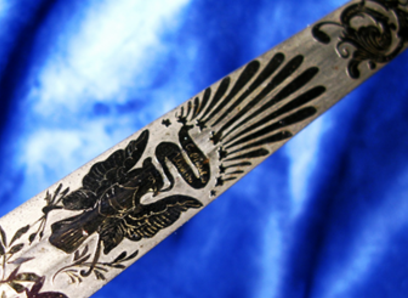 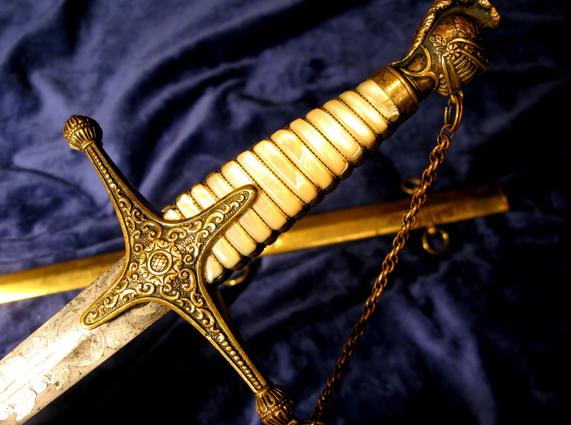 This sword displays a beautifully-etched and frosted blade in a manner consistent with all of the quality of the Ames company products.  The Ames name and address is needle-inscribed on the blade under the languet.  Wire-wrapped leaf mother-of-pearl forms the grip embellishment.  The brass scabbard is decorated with an acanthus and an acorn and oak leaf pattern. The scabbard appears to have been lacquered at a point, which was a fairly common practice in the 1960's.  It was usually done in an effort to preserve patina and reduce the necessity to clean.  However, over time, the lacquer may start to peel and flake lending a blotchy appearance to the item.  This sword is altogether a very nice specimen of a Militia Officer's Sword.

As in this picture at right, Non-Commissioned Officer's generally wore a plain knight-head sword; the blade void of etchings.  This is in stark contrast to the much fancier Ames Militia Officer's Sword featured at left. 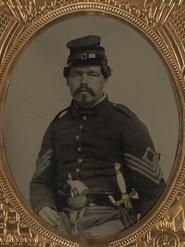