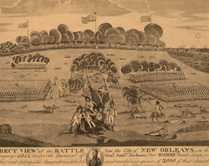 (Below) Various pictures showing the clean-cut and elegant lines of the Pillow Pommel sword. Click on the pictures to enlarge.

(Right) The distinctive "pillow pommel".  Popular in America from the late 1700's to 1815 when they faded out of favor. 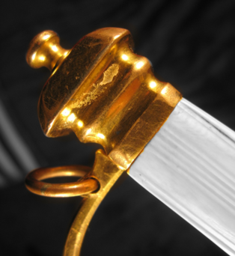 (Above) The American Eagle is displayed with 15 stars in an oval above above the motto "E Pluribus Unum" within a banner.  Click on the inset picture for details.

(Left) The Bolton company name with the British coined "Warranted" scroll etched into the blade.

(Below) The grip.  Click on the pictures to enlarge them.

Richard Bolton of Birmingham made numerous swords (especially Eagle Head swords) for the American market.  He was active in America at the turn of the 18th century and early 19th century.  However, as anti-British sentiment grew in America to culmination in the War of 1812, Bolton began being more subtle with the use of his name on the blades of his swords.  As seen here, the "Five Ball" pillow pommel was only popular from the late 1700's to 1815. 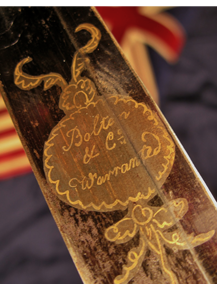 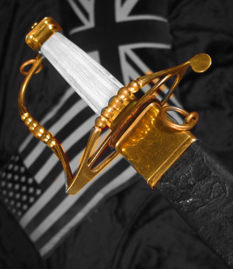