It is not uncommon to find greater evidence of corrosion near the tip of the blade, as opposed to the middle or ricasso.  Logical speculation is that moisture tends to congregate at the lowest point.  This creates a moister environment in the chape/drag, which exacerbates the corrosion process on the tip of the blade.  Swords stored upright for long periods of time may be subject to this form of exagarated corrosion. 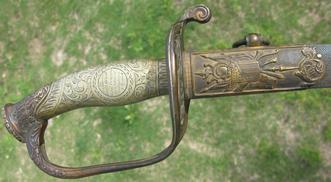 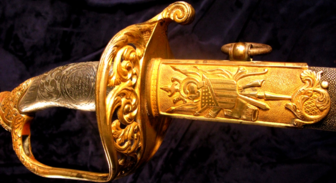 Below is an 1840 Cavalry Saber.  This piece has not been cleaned, but has been maintained.  The hilt has intact leather grip with twisted brass wire.  The guard has a dark aged and unpolished patina.  The scabbard has a character that speaks for itself.  In my opinion, to clean (other than for preservation), or polish this sword would remove the character and decrease the value in the eye of a collector. 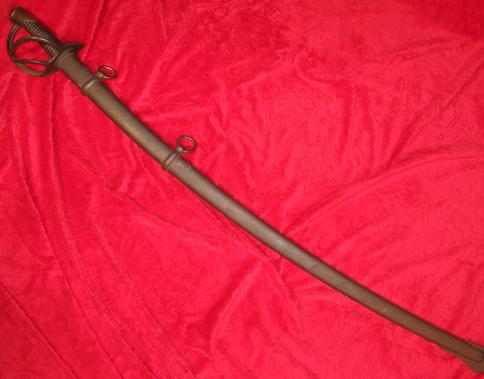 Note how the condition of the gold gilding has remained almost wholly intact on the brass under the dirt.  No polish is used as the compounds may remove the gild and also the natural patina prized by collectors.  The treatment as described preserves both gild and patina.

Should You Clean Your Sword or Leave it Alone?

It depends.  As mentioned above, cleaning is a subjective, personal choice.  Below is a presentation foot officer's sword that was neglected for over one hundred years.  Under the dirt is a silver grip with gold-gilded brass furniture.  Using warm soapy DISTILLED water in conjunction with a mild diluted ammonia solution, we are able to remove the dirt without removing the the naturally-aged brass patina, yet expose the gold gild along with the intended nature of the sword.  This is something one would probably not consider doing on a field sword.  NOTE: No polish is applied; only a thin coat of museum wax is utilized to create a barrier between the metal and the atmosphere.  The shark skin scabbard was later cleaned with a toothbrush and scant use of olive oil.  Before one attempts any cleaning on a prized sword, it may be prudent to practice on a less-treasured item.  If in doubt, seek out a professional. 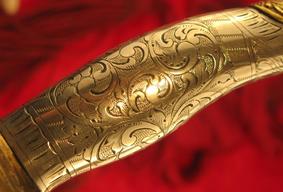 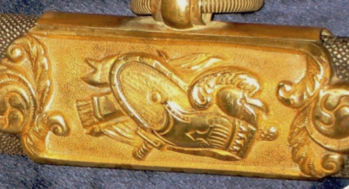 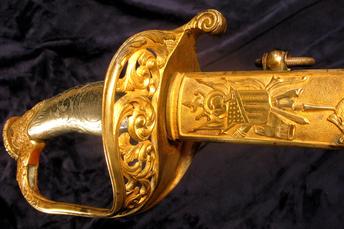 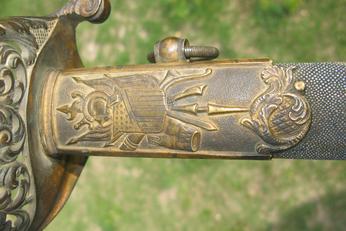 Approach caring for your swords with common sense.  Do no harm.  If attempting something that looks a little dodgy, practice first.  Be prepared for the task, and have it mapped out to conclusion in your mind before starting it.

Verdigris is a greenish oxidation that forms on metals such as brass, copper, and bronze.  This is due to having been exposed to the elements over time.  In my opinion, it adds character to a piece.  However, should you be working on verdigris, keep in mind that it is poisonous; therefore probably not a good idea to be eating at the same time. Wash your hands well afterwards. Caution: Verdigris can and is artificially induced by fakers wanting to add a false appearance of age.  So, while the presence of verdigris may be an indicator of age, it warrants caution.  Biox is a somewhat inert, bio-friendly cleaner that is used on verdigris.  It appears to be popular in the diving industry.  Biox can be obtained from the given website along with other preservation supplies. Conservation Resources International 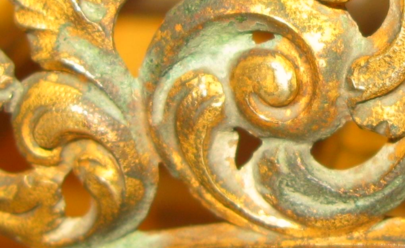 Bluing, over the many years, may have deteriorated, perhaps from the manner of application, exposure to the elements, or the use of incorrect preservation techniques.

Note the plumbing on the upper left of the blade 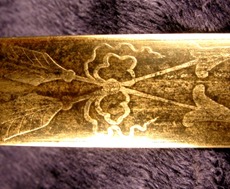 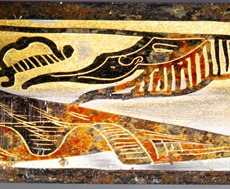 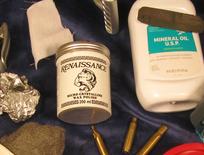 What'S In Your Preservation kit?

This section describes what I have learned and currently use regarding sword care.  I am not a curator, conservator, or in anyway formally trained in the preservation of antique artifacts.  Like most people, my knowledge  has been gained from others, personal experience, and from books on the maintenance for the preservation of swords.   "Restoration" is a practice I leave for professionals.  Cleaning an item to preserve it, is different from polishing it to a shiny new appearance.  How you choose to maintain your swords (and other artifacts) is a personal choice.  However, keep in mind, that by polishing a sword, you remove the naturally-aged patina and character so valued by collectors.  My personal approach on neglected presentation grade swords is 1) to remove rust and 2) to clean grime and dirt buildup only as necessary to reveal the natural character in the context of the original purpose of the sword.  It is important not to remove the aged patina or gold gild.  Field items I tend to leave alone almost entirely to preserve the character and blemishes that time has bestowed on them.  Once the natural character of a piece has been removed, it cannot be reversed.  It is critical that one uses the correct cleaning compounds, techniques, and preservatives when maintaining your artifacts.  If in doubt, contact a professional.

Bluing was a popular blade treatment from the early to shortly before the mid 1800's.  A copper-sulphate compound containing mercury was applied to the blade.  It was then fire-heated  evaporating the mercury resulting in a stunning blue finish to the blade, once it was polished.  A gold amalgam was then added to etched patterns  to create magnificent effects.  This form of blade treatment was to fall out of favor before the mid-nineteenth century.  The common speculation is that field maintenance of the bluing proved impractical, and a correlation emerged between the increasing mortality rate amongst those applying the bluing and the mercury fumes.

Maintenance of blued blades can be tricky.  I have consulted with many experienced sword collectors, dealers, conservators, and jewelers.  No one person has put forth a sure method of maintaining and caring for these beautiful, yet fragile blade applications.

The debate arises when rust is present on the blade where the bluing is found.  Does one let it be, or does one attempt to remove the rust and risk inflicting damage to the blade?  While the decision is a personal choice and may vary with the location of the infection, keep this in mind.   Rust never sleeps!  It will continue to erode your treasure to relic condition, if left unchecked.

A word of caution about jewelers.  I have seen where a "professional" has applied direct heat to a gilded sword guard destroying the gild in that area.  Be sure your jeweler has experience with antique applications and is familiar with the way they were applied.

Bluing, in itself, appears to act as a rust inhibitor, to some degree.  However, where rust gains a hold in a scratch or on an exposed blade part, it proceeds to steadily compromise the bluing around it.  Accepting that rust is the larger threat, I tend to get rid of it.  Yes, the infected area loses the bluing, but it was gone anyway.  More importantly, the disease is stymied, and further loss is prevented.

If you elect to undertake the rust removal yourself, good magnification, good light, and patience are key.  It is fine, time consuming work.  Never be in a hurry!  Brass is softer metal than steel.  I use a combination of custom fashioned bullet casings which will not scratch the steel, yet will remove the rust.  Once the affected area is free from active (red) rust, I apply museum wax which will then preserve and protect against fingerprints and dust moisture.