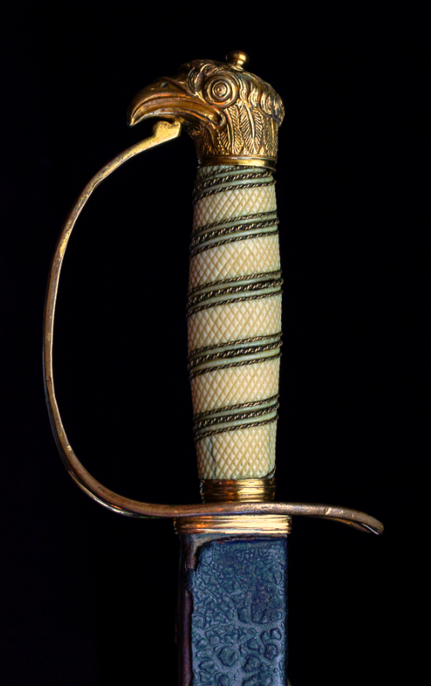 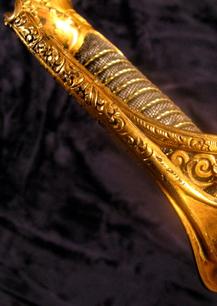 The backstrap is a metal frame over the top of the grip.  Its purpose is to give strength to the hilt.  It functions in absorbing the energy from strike trauma in place of the more delicate grip material, thus mitigating damage to the often more expensive and fragile grip material.

The picture opposite evidences a reverse languet.  This type of languet is seen on British Mameluke style swords as well as Eastern sabers. 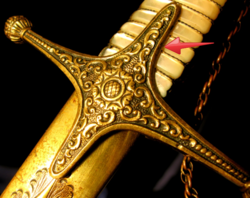 The languet/langet (taken from the French word for tongue) serves purposes other than mere decoration.  It helps prevent undue movement of the sword as well as keep water from running into the scabbard.  On enlisted men's swords, languets are generally plain, however, languets of officer and presentation swords, may be highly embellished.

On occasion, we find other decorative end caps used to conceal the tang.  I have heard say that the maker A.W. Spies utilized this technique, but have no formal source for this.

Not all tangs were peened.  Some culminated in a threaded end allowing for a nut to be added thus permitting the sword parts to be secured together.  This nut is referred to as the Capstan or Kapstan. These nuts are sometimes found to be quite heavily embellished and come in many variations.  Some swords, like those made by F. W. Widmann, had false nuts; the tang protruding through a false nut and peened over in the conventional method.   As we see depicted below, although there is a capstan nut, the tang protrudes through it.   It is always good to pay attention to this area as it can offer clues as to the swords history of restoration, modification, or simple maintenance.  Many a sword has been disassembled in its lifetime for one reason or another.  Unfortunately, wherever there is money to be made, various levels of ethical and moral standards have been applied.

The tang is an extension of the blade that runs mostly unseen through the grip before being peened over the pommel so binding the blade, grip, and guard together. It is on the tang (hidden from view) where identifying markings may also be found.  However, without taking the sword apart, these markings will likely not see the light of day.   It is on the peened end of the tang where collectors will look for evidence of tampering.  It is here you may get an indication if the sword has been taken apart for maintenance, blade replacement, or other more sinister motives.  The tang pictured below (left) shows no evidence of tampering.  Note the aged steel and even tang on the undisturbed pommel.  The tang below (right) looks like a mushroom cap.  Somebody pummeled this tang without much care and finishing.  Note the surrounding brass also shows hammer indents from being pounded.  It is likely that this sword was put together from assembled parts fairly recently or had some major "restoration" done to it by a not-so-talented "craftsman." 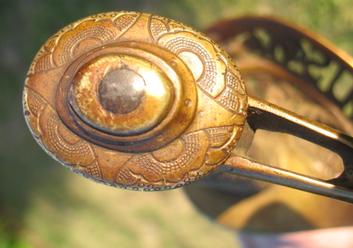 The pommel is where the sword grip, tang, and knucklebow tie in together to complete the sword.  Some swords were purposely designed to make use of additional weight in counterbalance to the blade thereby creating a functional balance allowing the sword to be used as an effective weapon.  There are no shortages of variation in pommel design.  As with other sword parts, the pommel may reflect sword, status, branch and/or grade by style and/or degree of embellishment.  Rank and file swords (generally) being plain, while officer's swords may vary greatly in opulence. 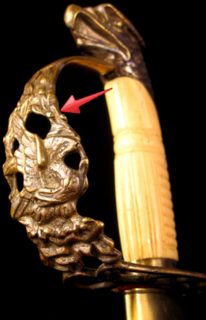 The ferrule serves as the cradle for an often more fragile grip material such as mother-of-pearl, bone, or ivory.  It holds the grip material in place adding strength and mitigating damage that may be caused by raw torque or force from shock impact.  Can you tell which one was made by the sword maker F.W. Widmann?"  The answer can be found on this site.  Widmann used his own unique decoration which is as good as his signature.

Like the guard, the primary function of the counter guard is to protect the hand and wrist.  On higher grade swords, these may be found to be highly embellished. 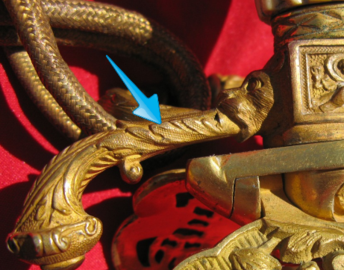 The finial is located on the end of the quillion.  Finials come in many designs and degrees of embellishments.  The finials on higher grade swords usually reflect more flamboyant and detailed designs.  The degree of detail applied correlates to the sword grade exhibiting high degrees of finely chased and engraved work.  In the pictures below, the quillions are short.  Only the end decoration would be considered the finial.  On swords such as the M1850 Foot and the M1850 Staff & Field Officers swords, the appendage may simply be referred to as "the quillion."

Between the guard body and the finial is the quillion.  The quillion helps deflect a blade blow while the finial stops the blade's passage (hopefully).  Quillions may be of different lengths; some so short the finial and quillion is simply referred to as the same piece.  Variances exist in books when describing these parts.  The sword pictured at left shows a clearer distinction between the quillion and the finial which may be harder to distinguish in those picture below.

The hilt describes the entire section up to the blade.  It is fairly obvious that the guard's primary function is to protect the hand.  Guard configurations are as varied as they are embellished.  A collection can be built around guard variety alone.  Of American swords, the Civil War period M1850 Staff & Field Officer's sword and the M1850 Foot Officer's swords are amongst the most popular for this reason.  Less familiar to the new collector are the various appendages that are a part of the hilt as a whole, but each have their own identity and characteristics.  Some of those will be covered here, but others will not since they are not present  on the swords discussed (at least for now). It suffices to say that most people know what a guard is when they see it.

The washer is designed to mitigate shock, reduce looseness between the guard and the blade, lessen noise, and aid in preventing water from entering the scabbard.  The blade washer protrudes through the guard peeling back over the face of the guard.  This helps create a seal between the guard and the scabbard.  The original washers have commonly (as often as not) been lost to time.  Washers were predominantly leather, however, red wool is also quite common (usually on imported European swords).  Modern replacement washers are commonly cut out and fitted over the blade as replacing it in the original manner would require removal of the blade. Washers may come in various patterns and design.  Can you detect the fake washer in the pictures? (Along with the faked US/1850 markings, note the artificially aged leather).

A "stopped fuller" simply reflects that the fuller is abruptly ended.  It defines where the blade stops and the ricasso starts.

The term "fuller" refers to a section (or sections) of steel that is/are carved out along the blade.  There can be several fullers or none at all on a blade.

Although there are several styles of blades, I think that we all have the basic idea as to which part of the sword is the business end.  So I will not take the space with it. I will instead focus more on the lesser-known sword part details; at least until I have more free time at my disposal.  One point that must be noted, is that the sword is generally in straighter format than the saber.  The saber exhibits a significant arc.  More often than not, the saber was used by mounted units. I have also included a straight "cut & thrust" style blade for reference comparison. 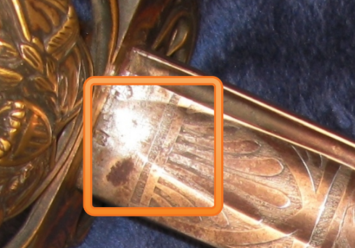 The "compromised" tang featured above right, is on a composite Knights Head Militia Sword (Circa 1840).  Older versions of this sword utilized a broad, double-edged blade, etched with a central fuller.  This sword has the older pattern pommel, fluted bone grip, and guard, however the blade is that of a much later, thinner, diamond-shaped blade of the M1860 Staff Officer's Sword.  Although beautifully etched, it is not correct.  One can be fooled if distracted to focus on a single element! 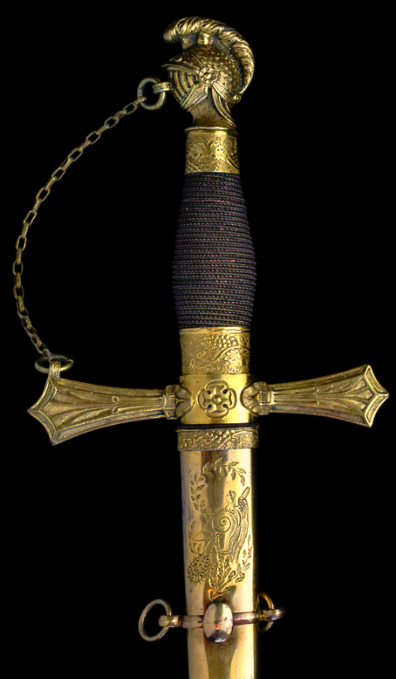 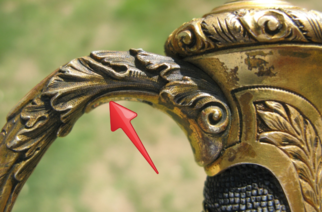 The heel is the curved section immediately before where the knuckle-bow joins the pommel.  Commonly, there is a correlation between heel embellishment and sword grade.  This heel (red arrow) is an early Ames on a high grade foot officer's sword.

The spine of a sword is commonly plain.  In swords originating out of Solingen, Germany we find the words "iron proof" etched.  Swords that originated in Klingenthal will commonly be etched on the spine in a scrawling cursive script.  High grade swords may also be found to have additional etching, frosting or gold wash applied.  This can also be an indicator of sword grade.  Spines maybe rounded, pipe-backed, or flat. 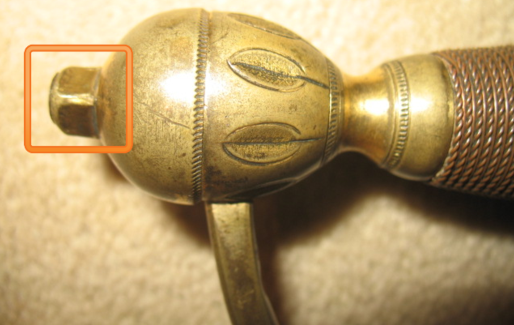 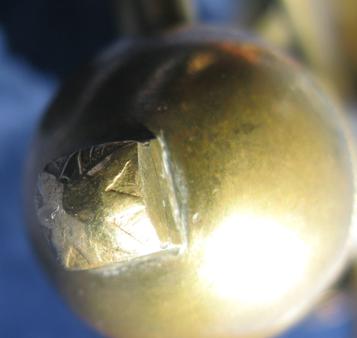 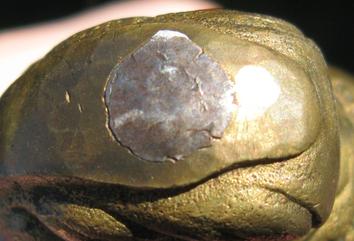 Again, this part is fairly self-explanatory.  The knucklebow forms a guard over the knuckles thereby protecting them.  As with most swords, this part may be plain or elaborately embellished.  The degree of embellishment usually corresponds to the status or grade applied to the sword. 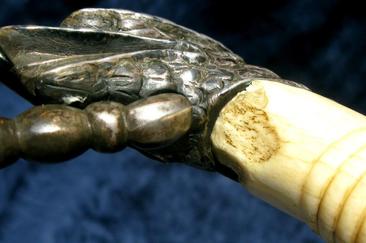 It is fairly common to find damage and chipping on the grip where it meets the pommel or ferrule.  Without much ability to absorb sudden shock when dropped on the drag, the more fragile bone, ivory, or mother-of-pearl would chip along fault lines.  Finding a complete grip without chipping is desirable (at least to me).

From the American Revolution to the Civil War, grips for officer's and presentation swords were principally made from brass, bone, Ivory, horn, Gutta-Percha, Mother of-pearl, or silver.  The enlisted man's sword grips were more rudimentary, utilizing  wood, brass, or wood-wrapped leather which was bound with twisted brass wire (Confederate swords may frequently utilize a single strand of copper).  Into the American Civil War, officer's swords saw a conversion to twisted, wire wrapped, shark skin (which was expensive, but provided for a good grip in battle hands).  Higher grade swords took on German Silver (an alloy of 60% copper, 20% zinc, and 20% nickel), bronze/brass, or carved ivory.  The enlisted man's sword grip generally remained the same; composed of  brass or wood.  The wood grips were commonly wrapped with leather and bound with twisted brass wire.  Examples shown at right are only a very limited selection of grips (I am working on it).

An "unstopped fuller" reflects that the fuller does not end abruptly, but gradually tapers out.  As you can see in the picture, the ricasso is not defined.  Unstopped fullers appear on many confederate swords.  Unfortunately, they also appear on many reproduction and faked blades as well.

The ricasso refers to the visible short span of blade between the end of the fuller and the guard.  One will usually find a maker/retailer's mark.  This is also where one will find inspector marks on government contract swords.

Fullers are also referred to as a "blood grooves."   It has been willing speculation that the grooves were fashioned to allow for the easy clearing of blood from the blade.  However, the functional aspect of this groove would appear far less dramatic.   Weight was a serious consideration in the field for the soldier; crucially, the basic ability to wield the sword as an effective weapon.  Fullers were a means of removing areas of steel from the blade without compromising the integrity of the blade. 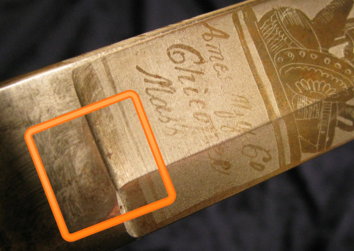