(Below) Catch 22 - Is the copper wire under the pommel bright because it has been protected, or should it have congealed grime from a century and more tarnishing it?  Note the appropriately period shark skin grip, which is completely original. 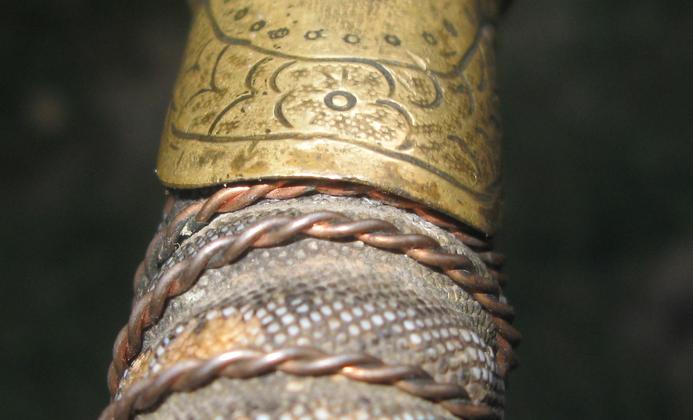 (Below) Looking at the tang, you will note an additional added brass end cap which is of inconsistent (lighter) color than the pommel.  This is a lower end sword, so it is possible that the poor quality of the modification is consistent with original period use. 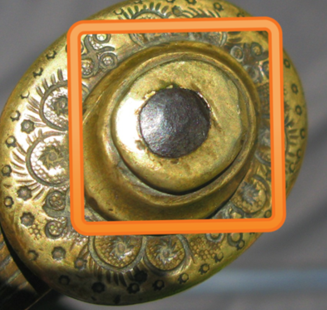 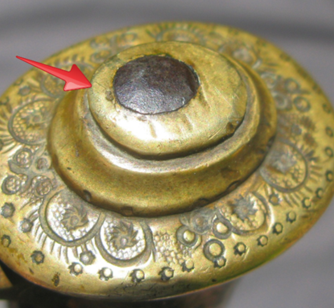 On closer inspection, we find that the blade of the sword is approximately three inches shorter than the scabbard.  This suggests the scabbard is from a different sword.  Click on the inset picture for a magnified view.

(Left) Apart from the poorly cleaned scabbard, this sword might appear to be a nice example of the desirable brass guard variation of the M1850 Non Regulation sword. 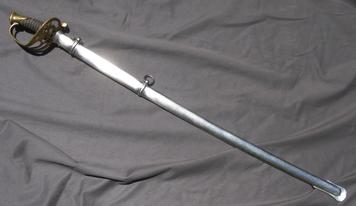 Many swords have been assembled from original parts.  By taking original parts from swords that have succumbed to the ravages and abuse of time, an original, yet mutant piece is produced.  I have heard the term "Frankensword" adopted by some experts.  These pieces may be tough to spot and are likely to fool both novice and seasoned collector.  Below are a couple of hints and pointers of what to look for. 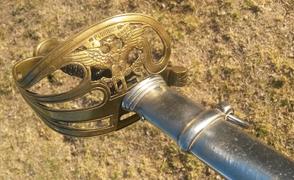 Confederate swords were almost NEVER dated.  Any such marking should be viewed with all caution.

(Below Left) An original eagle guard shows chasing and engraving detail as well as the gold-gild consistently applied to higher grade presentation swords.  (Below Right)  An apparent reproduction copy that has been stripped and artificially toned to take on the appearance of an original.  Note the lack of any gold-gild.  There should be some gild remaining in the nooks and crannies, but there is none. Also, note the lack of hand-finishing of finer chasing and engraving.   This fake appears to have utilized an original Tiffany blade (this is also questionable), but the rest of the sword and scabbard is certainly a composite collection of artificially aged reproduction parts.

(Right) Faked presentation on a reproduction scabbard.  Note the warm family touch ("from his Father").  The presentation on the sword was to an actual Civil War officer of high rank, however, completely faked.

(Below) Note the haphazard, crude engraving.  On a presentation sword of this grade, the engraving should be  immaculate.

(Right) Close examination of this mount evidences sloppy application of stain applied to a reproduction scabbard to give it a false appearance of age. 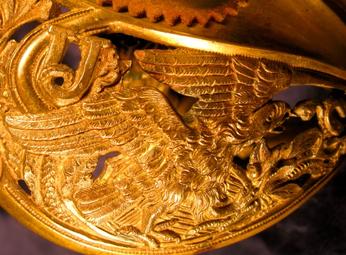 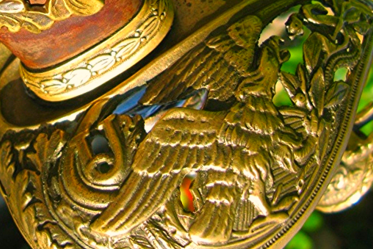 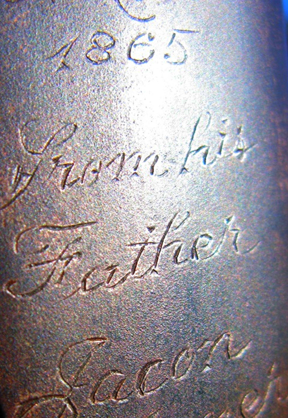 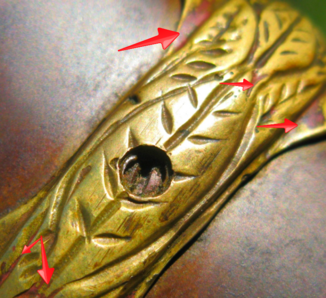 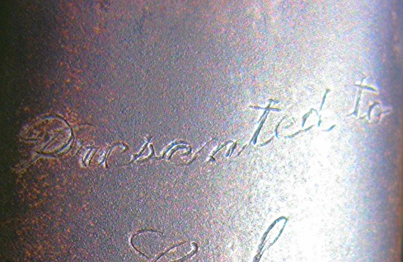 (Left)  Faked "US" and date stamps on a reproduction blade.  Note the artificially aged leather washer in the foreground.

(Left) The words "IRON PROOF" were prominently featured on many of the swords originating in Solingen, Germany.  Unfortunately, as in this case, they are also featured on reproduction swords which can add confusion to the market. 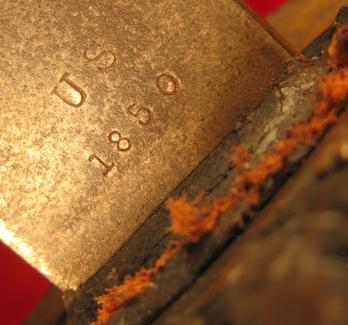 (Right)  Artificially aged triple wire over fake leather grip.  Note how the center wire has even been notched and grime has been applied between the wires to give an appearance of genuine age.  If we separate the grip material at the seam, we find it is a modern fabrication.  Another give-away is that the material does not extend under the pommel.  (Click pictures to enlarge.)

This has been mentioned on another page within the site, but warrants repetition.  If you find a sword blade that is missing the "E" from "E Pluribus Unum", chances are it is a reproduction. 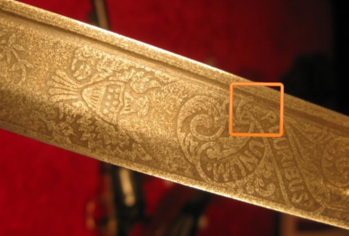 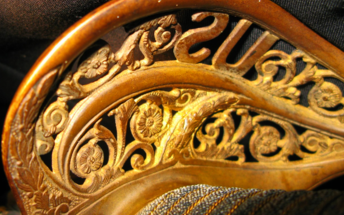 An Original Import M1850 Staff & Field Officer's Sword. Note the difference (from the guard in photo at right)  in the attention to detail.

Faked Down Reproduction M1850 Staff & Field Officer's Sword.  Note how grime has been added into the crevices to give the illusion of age. 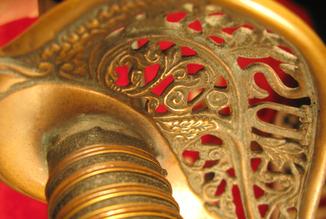 A reproduction is not a fake until it is altered with the intent to deceive a buyer for financial gain.  In my experience, I have found that most fake swords are composite constructions or altered reproductions that are artificially aged and intentionally abused in a manner that would create an appearance consistent with original period use.  The intent being to deceitfully add an illusion of authenticity.

"What kills a skunk, is the publicity it gives itself." 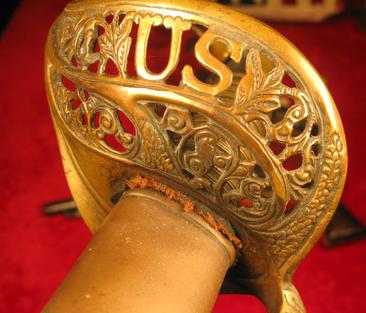 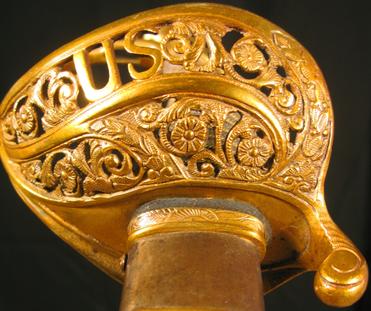