"One of the characteristic  features of the early Ames Staff & Field Officer's  swords is the plain block "U.S." etched on the blade.

The above-pictured officer is holding an M1850 Staff & Field Officer's sword.  Note that the scabbard top mount, however, is that commonly seen on foot officer's sword. This indicates, perhaps, that it is a leather scabbard, not a metal scabbard..

Finding an early 1861 dated Ames contract sword is extremely hard.  One of the key points and differences of this contract sword was the double Ames marking.  One marking is found etched on the blade above the ricasso and the other scroll marked on the ricasso.  This appears to be unique to the 1861 swords.  Also, the 1861 contract swords contain a three line inspection mark ("U.S./GGS/1861").  The 1862 models have the inspector's initials on one side of the ricasso and the 1862 date on the other.  No "US" is stamped. 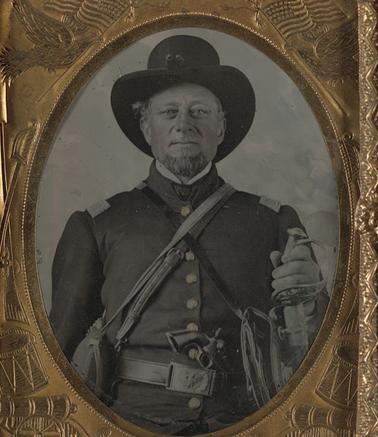 This sword is a desirable 1861 contract sword dated and inspected by G.G. Saunders (GGS) 1861.