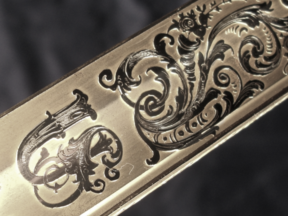 Popular from the late 18th century to the mid 19th century was the use of gold amalgam inlay.  Similar to the process of bluing, a gold amalgam was applied to blade etched designs.  The mercury was evaporated off leaving a fine gold finish.  This practice faded out along with bluing before the advent of the Civil War.  That said, residual blades from the era appeared to find their way into the market on occasion. One does find custom Civil War model swords with the older style blades attached.

Like bluing, frosting was an application usually reserved for officers blades.  Although used early in American sword manufacture, frosted blades appear to have become a popular replacement for bluing during the 1830's.  Many of the blades seen of this period through the Civil War and beyond, evidence the practice of frosting.   Sword makers found that by briefly exposing desired parts of the blade into an acid solution in an etching process, it gave the blade a frosted finish.  This frosted finish background accentuated an otherwise standard etching with grand effect.  It is easy to "polish off" the frosting effect from the blade, so great care should be taken in preserving its condition.  Once removed, it cannot be restored.

Blade etching has been around for centuries.  Simply stated, it is a process of using an acid solution to consume the blade metal resulting in the form of a particular design.  Blade engraving differs from etching in that physical tools, rather than chemicals, are used to carve the metal.  Known in ages past as "Aqua fortis," the acid is applied to exposed areas of the sword blade for defined periods of time depending on the desired effect.  A wax coating is applied to the blade protecting the blade from the acid, except in the design areas.  The blade is then submerged in an acid bath for a period of time dependent on the desired effect.  Too short, and the etching may be too slight.  Too long, and the acid may corrode under the wax causing a distortion of the pattern.  Engraving was often used to finish the blade.  The first picture below shows a blade etched, engraved, and frosted.

Bluing was the art of evenly applying heat to the steal of a sword blade to give it a fine blue luster.  These blades, usually reserved for officers.  Once polished, a residual brilliant blue finish would result.  Although the workers were well-paid, the bluing process was extremely hazardous to them due to the poisonous fumes released during the evaporation of the mercury.   At this time, the hazards were not understood (or perhaps disclosed) to those working with mercury.  Bluing proved popular in America between approximately 1800 to 1840.   It is speculated that its decline is owed to the impracticality of maintenance in the field and the correlation between the mercury and a heightened mortality rate amongst workers. Great care should be taken in preserving bluing as many cleaners (including gun oil) may damage or remove it.  There is more on this in the Care & Maintenance section of the site.

The Liberty Cap (right) is prominently featured on many American swords.  It was primarily adopted by American forces at a time when it was enthralled by all things "French".  It symbolizes  America's revolutionary break to independence from the British and the French revolutionary break  from  an oppressive  aristocracy.

The gold-washing of blades was reserved for the finest swords.  This wash was applied to the frosted part of the blade resulting in an impressive gold backdrop on the blade.  Wherever one finds a sword with such a blade, it is sure to come at a premium.  These blades also tend to come with the finest, most flamboyant etchings.   Clauberg in particular appears to have practiced and perfected this technique perhaps better than any other. Their gold-washed blades are considered amongst the finest.  As with frosting, great care should be taken in preserving gold-washed blades so as not to remove the wash.

It is in your past that you discover who you are....