Klingenthal blades are often found on the Etienne Le'on assembled swords.  E. Leon was an assembler in Paris, France and is recognized by the stamped "E.L." under three punched stars.  This mark may ordinarily be found under the quillion on the front face of the guard.  He operated as a cutler from 1836 until his death in 1845 when he was succeeded by his widow. 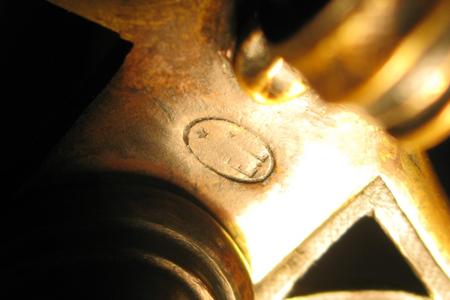 Klingenthal means "Blade Valley" or "The Valley of Blades."

Klingenthal was a premier sword-making town in the 18th century.  However, the quality of its product waned with its orders.  The fall into disrepute was due in large part to the use of inferior steel.  Below is a website link which will take you to a very informative site on the history of Klingenthal as a sword-manufacturing town.  One may get translation by copying and pasting text into the translator on the Google website.  There is an English version of the site, but it does not have as much information (especially about swords) as the French version.

Klingenthal blades are recognizable by the poincons on the ricasso.  These poincons, as well as the cursive name inscription found on the spine of the blade, can be used to identify period of blade manufacture.