Widmann also used the squared drag on many of his swords as pictured below (click to enlarge).

Featured above right, is one of Widmann's spread winged eagles for which he was well known.  Note the design also incorporates stars and rays which is also an indicator of his work.

(Below) The scalloped quillion/finial, although used on other swords, is widely recognized on the American swords as a Widmann trait.

Widmann used a vine and leaf design on many of his scabbards and blade etchings. 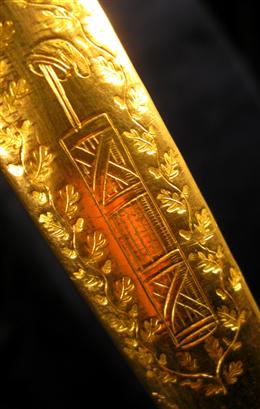 Grape Leaf Ribbon unique to Widmann, who made his own ribbon.

Frederick Widmann came to the United States from Prussia.  He made and sold swords in America from around 1816 until his death in 1848.  His swords have some very recognizable and specific characteristics that make them unique and very attractive to the collector.  On his death in 1848, William H. Horstmann, of Horstmann & Sons, who had been a long-standing business associate, took over his equipment.  However, without Widmann's application of style and craft, the uniqueness that had emanated in his work, blended with Horstmann's style, eventually being absorbed into the Horstmann enterprise; and so faded another master sword-maker into the history of the American sword.