The eagle image on the blade was used until 1848.  Blades dated later than 1848 no longer display the eagle.  The eagle pictured at right retains strong definition.  Often, the years of wear and cleaning cause fading and loss of detail. 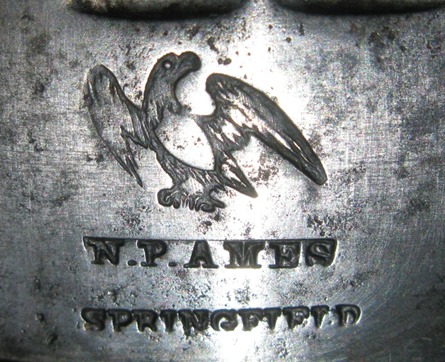 It is quite common to find these swords without scabbards.  The abuse, suffered through two wars and more, would have taken a heavy toll.  This is why some people have substituted the scabbard with its French counterpart; replacing it when unable to find a correct Ames scabbard.  An easy way to tell whether the scabbard has been changed out in this manner is by looking at the drag and the top mount.  Ames used rivets to fasten the mounts as shown in the pictures below.  The French models have staples.  Horstmann scabbards also made use of the staple method of attachment, in which case that might be an original scabbard on such a sword.

It is often hard to tell if scabbards are original to a particular sword.  Through a century or more of field use and with the natural afflictions of time, scabbards have been lost, broken, and replaced.  I am particularly fond of this sword because the inspector's marks are both on the sword and the scabbard which indicates that this sword and scabbard have never been parted from each other.  William Anderson Thorntan's (U.S. Armory inspector 1840-1869) marking is seen on both the guard and on the nipple of the scabbard.  Joseph Hannis's marking (or one of the six or so possible "JH" markings) appears on the guard, the blade, and the scabbard nipple.  Not all M1832 scabbards are marked in this fashion. I have seen more unmarked scabbard nipples, than marked. 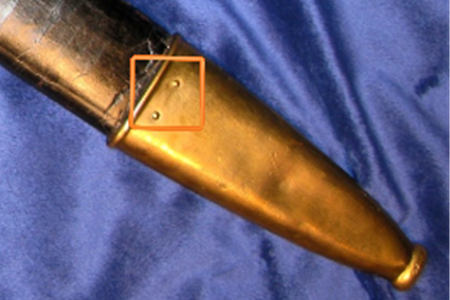 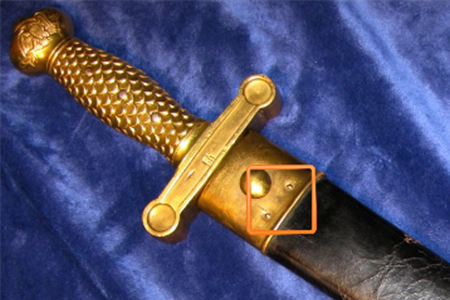 This is a very popular sword with collectors.  The gladius style, shorter, less cumbersome sword was preferred by the troops for those reasons.  Modeled after the French M1816 Artillery sword, it was adopted into American service around 1832.  As an effective weapon, this sword would not have had much use.  Its probable utility was likely that of cutting brush, digging, and other tasks around camp.  This is likely the reason why finding these swords in good condition is relatively difficult.  Of American makers, Ames was the primary producer of these swords, but rare Horstmann models can also be found.  Caution should be taken in not confusing American market models with those of French and European market models.  Amongst those American models most coveted by collectors are those early models marked Samuel Huse/Newburyport on the guard.  Before Ames undertook to make its own hilts, it had to have them made.  It did this through Samuel Huse, in Newburyport (Samuel Huse was related to N.P. Ames' wife).  However, deficiencies existed with the Huse brass hilts.  In addition, a lack of timeliness in meeting commitments motivated Ames to start manufacturing its own hilts.  Huse-marked swords are recognized by collectors.  These early Ames models will tend to sell at higher prices.

It should be noted that these swords have also been reproduced and, consequently, fakes made.  From the book by Clegg Donald Furr, American Swords & Sword Makers' Marks, A Photographic Guide for Collectors, published by The Paragon Publishers (1999), the year "1839" appears to be a commonly faked date and would warrant elevated scrutiny. 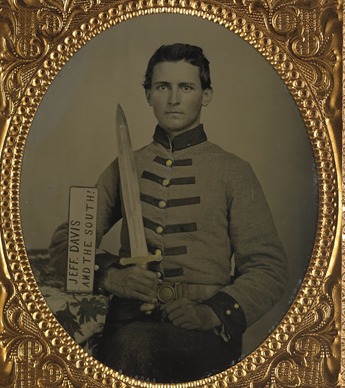